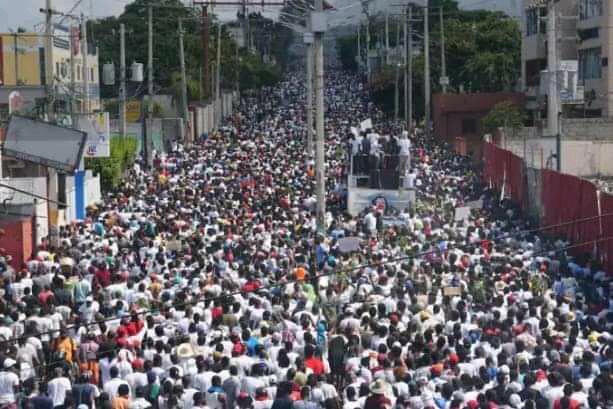 Fanmi Lavalas supports the masses of the Haitian people in their call for “Sali Piblik” or a people’s government of public safety in opposition to an oligarchy backed by the US, UN and OAS determined to perpetuate a system of exclusion. Watch this short video with english voice-over [english trans. by Haiti Action Committee] to learn more.

Fanmi LavalasPolitical Organization fully supports the people of Haiti who say that the system is totally broken. Our people are calling for an executive and a government that guarantees the public’s safety. Why Public Safety?

It is clear to all that the three branches of government have collapsed. The order of the day corruption, organized crime, impunity, theft, plunder, social exclusion, miserable living conditions and desperation. The executive, legislative and judiciary have come together as one to crush the Haitian people. People have absolutely no trust in this government.
Fanmi Lavalas published a document titled “Crisis and Solution” on November 15, 2018. We stated that, after the resignation of Jovenel Moise (indicted president) who was imposed as a result of the 2016 electoral coup d’etat, there will have to be a new executive and a government of public safety to make the transition. Which individuals will lead the transition? They will be people who are honest and credible; they are in the country. People who believe in transparency, in the struggle against social exclusion, corruption, people who believe in a different form of governance. They will restore trust between the people and the state.
Let us look at some of the major steps that the transition government will have to take:
1) Improve the living conditions of the population through an effective management of state resources
2) Create proper conditions for the legal case regarding the PetroCaribe funds
3) Organize a real national dialogue.
4) Revise the electoral law in order to organize credible elections in the country
5) Organize a constitutional committee
The transition will lay the foundation for the new system that all Haitians aspire to. That is a system based on Social Justice, Transparency and Participation. Where there will be no more social exclusion. We will be investing in people so that everyone can live as human beings because every person is a human being. As President Aristide always says ‘If we don’t safeguard our dignity, we will lose it.’ Alone we are weak, together we are strong, all together we are Lavalas!”
English translation of the full Fanmi Lavalas proposal titled “Crisis and Resolution” originally published in November 2018 can be accessed at this link: https://haitisolidarity.net/crisis-and-resolution/.”