In this article we provide a brief update on some of the societal impacts that the global pandemic is having on Hispaniola’s population, and in particular the Haitian diaspora living inside the Dominican Republic.

A recent Washington Post article, helped to illustrate some of these arguments, referring to Haiti’s “relative isolation”, which could be variously interpreted; be it economically (tourism loss due to the pandemic), or Hispaniola’s aforementioned unique geographical location and topography.  The WP article went on to point out, that … “Rumors, particularly in rural areas, that symptomatic Haitians are being used as experiments for unproven vaccines have led some to avoid treatment.”

Another point the article made was that…“People fear they are being used as guinea pigs,” as the paper quotes William Pape, head of the Haitian government’s Covid 19 task force. In addition, regarding “isolation” this could also be interpreted (economically) as the virtual tanking of tourism in the Caribbean during the pandemic, in great measure due to the negative pressures into the region, owing to the present Covid-19 crisis in the U. S., which besides Europe, is the region’s major source of tourism.

A recent statement by the Dominican Republic’s “ASONAHORES” (The Association of Hotels and Tourism) Vice-President Andres Marranzini, points out that the best current occupancy rate in Dominican Republic stands at about 35%.  Marranzini made this ominous comment, that due to strict rules set by originating countries, regarding travel restrictions for Dominican Republic, this has significantly lowered incoming tourist traffic into the island country.

A source in Bavaro area of Dominican Republic told HaitiAnalysis that among about four or five hotels in that resorts cluster, perhaps only one is opened and the other ones are shuttered.  Another Bavaro source, who works in the resorts rooms servicing area, stated that she’s been submitting many resumés in area resorts with negative results.  We must remember that Dominican Republic resorts, across the entire gamut, are very labor intensive operations, both directly and indirectly, wherein for example; among the indirect jobs affected, are handcrafts laborers, taxi and bus drivers, etc., with a ripple effect impacting into the peripheral informal economy surrounding the resorts littoral, creating depression level unemployment rates.  The more touching and human side of this picture, are the dire stories of single mothers, some with three children, whose extended families testify of hungry children, directly affected by the high unemployment rates of the eastern littoral Dominican Republic resorts, caused by the Covid 19 pandemic. 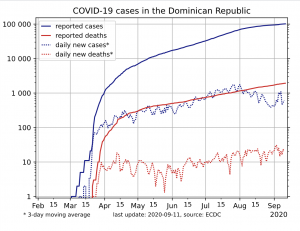 The Dominican Republic’s newly elected neoliberal PRM Party government, faces a daunting task, in reactivating its pandemic stricken economy.  To their credit however, Minister of the Economy Miguel Ceara Hatton, has outlined a comprehensive recovery plan in the media, which in the short run keys on the fluid flexibility of the unique Dominican informal economy, which for instance has a very labor intensive construction sector, incidentally, heavily dependent on Haitian construction laborers, earning relatively better than average wages.  Another area of the Dominican economy is the agricultural sector, which also is very Haitian-labor intensive in its rice producing sector for instance.  In a recent interview, Ceara Hatton described a sort of “mini New Deal” economic recovery plan, wherein the government will directly inject funds into the economy, intervening for instance in the disaster recovery of the eastern side of the country, in areas where large sectors of the population, lost homes & belongings during the onslaught of recent tropical storms.  Ceara Hatton stated, that an immediate effect will be felt, in the informal economy, as residential building reconstruction efforts get underway immediately, from now until the beginning of 2021.  Ceara Hatton however, emphasized that the health factor would be paramount in the government’s economic recovery plan during the pandemic.  Hatton also mentioned, that the agricultural sector, is within the government’s economic recovery plan priorities as well.

Regarding Haiti’s interaction with the Dominican Republic, and the Covid 19 crisis, we must remember that since colonial times, going back to the 18th Century, whatever happened on one side of the island, sooner or later impacted on the other side, and this crisis hasn’t been any different.  For instance, when the pandemic first struck on the eastern side of Hispaniola, in the relatively short period between late March and early April, about 4,200 Haitians  went on mass exodus towards their home country, most of them crossing the border through the main international border crossing of Dajabon/Ounaminthe in the northwest of Dominican Republic.  Since over 60% of the Dominican Republic’s GNP is in the informal economy, which is the sector where the largest Haitian population works, it is obvious that a deleterious effect is going to be felt in Haiti, due to lower remittances rates resulting from incomes lost from the mass exodus returnees.

As it sometimes happens with critical bi-lateral issues, the Foreign Ministers of Haiti and the Dominican Republic engaged in a video conference, on May 6, 2020, to set common strategies dealing with the pandemic.  Along with this bi-lateral meeting, the Panamerican Health Organization raised alarm bells, stating that a “humanitarian crisis” could ensue in Haiti, due to the pandemic, with the ominously aggravating factor, of the millions of persons confronting food shortages daily.  As of the date of this bi-lateral video conference, some 17,000 Haitians were estimated to have left Dominican Republic due to the pandemic, and within two to three weeks, 55,000 were expected to leave.

Anecdotal first hand information available to HaitiAnalysis suggests that urban populations have beyond the most hard hit. Beyond larger agriculture farms there also exists in the Dominican Republic many smaller family farms, what are called a “conuco”, where many Haitians and Haitian-Domincians work in small scale production & the tending of these farms, which produce such staples as plantains, pumpkins, and so on.  The subaltern and migrant working population in these small farms appear to be somewhat stabilized, with the added social benefit of entire family units integrated into the “conuco”, working in year round production of the various crops.

Therefore, we can safely assume, there has been a noticeable difference between the informal economy-connected Haitian migrant and urban poor population, such as among street vendors, and the population engaged in agriculture within the Dominican Republic.  Thus, the agricultural sector Haitian migrant community, appears stabilized socially due to year round labor demand, while the urban informal economy Haitian migrant population, has meant that many have been compelled into a return exodus, in great measure predicated by economic volatility caused by the pandemic, and the abrupt weakening of the Dominican “circulante” effect, (“circulante” is the Dominican idiom, signifying the daily exchange of money for payment of goods and services, primarily within the informal economy).

In conversations with informal economy Dominican workers, idiomatically known as “chiriperos”, HaitiAnalysis has  been aware in the past, that “chiriperos” were generating sufficient income on any given day, in order to put food on the table for their families on the following day.  Again, the pandemic has injected unexpected volatility, of lower “circulante” factors in the informal Dominican economy, affecting not only the native “chiripero” informal worker population, and as its reverberates throughout the entire informal sector, this has obviously hit hard the Haitian urban vendor population, with the collateral effect of mass exodus. Its been reported that around 70,000 Haitians in the Dominican Republic have fled to Haiti, due to instability caused by the crisis on the eastern side of the island.

Regarding the Covid19 scenario in Haiti, one source states that there are only 130 intensive care beds in the country, but the real number could be much smaller.  In addition, about two thirds of the country’s health budget, is dependent on international aid.  In this regard, China and Cuba have played dominant solidarity roles, within the present pandemic scenario in Haiti.  For instance, Cuba has deployed 348 doctors and other specialists, in order to deal with the present crisis.  According to this same source, “social distancing is a pipe dream”, within the population living in its overcrowded slums, thus herd immunity becomes an unavoidable reality in Haiti.  Haiti continues to suffer a political stalemate as the Trump administration supports a very unpopular government in Port-au-Prince, seen widely as illegitimate, that continues to depend on US support for its survival. 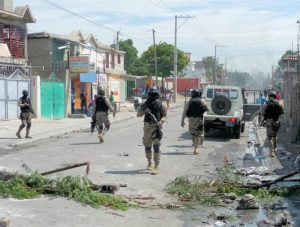 Regarding crime statistics connected to the Covid-19 crisis in Dominican Republic, as of late March, the National Police General Director stated that higher family violence rates were being reported, again, obviously due not only to lockdowns and curfews, but also to the adverse economic impact, brought about by the pandemic.  In addition, in a recent conversation with a Dominican National Policeman who patrols working class popular neighborhoods, this journalist also learned that indeed family violence incidents were on the rise, since the beginning of the pandemic.  When asked about street crime rates in relationship to the pandemic, this policeman stated that due to the present economic crisis, and the aforementioned downward trend of the typically Dominican “circulante” factor, street crime had diminished, precisely because there was much less street movement caused by the crisis.

As of September 5, 2020, 8,326 Corona Virus cases had been reported in Haiti, with 212 deaths.  And as of August 21, 2020, 89,867 confirmed cases were reported in Dominican Republic, with 1,533 confirmed deaths.  So far these numbers have been far, far below the much higher numbers that government officials, journalists, and healthcare workers  earlier in the year feared could hit the country.  It remains to be seen though, with growing numbers of migrant families returning across the border to Haiti, how this “Hispaniola factor” may impact the country.