Since 2004, successive administrations have partnered with Washington to loot Haiti, stripping away its assets to the point of collapse and leaving it woefully unprepared to face the coming pandemic.

For a population of 11 million people, Haiti has only 62 ventilators and barely 100 intensive care beds. The Caribbean nation spends just $13 per capita on healthcare, less than 10 percent of what even its neighbor the Dominican Republic spends. And while the country officially has only 47 COVID-19 cases, nobody believes that figure. While tests are hard to come by in the U.S., in Haiti they are like gold dust. Decades of neoliberalism and U.S. intervention have left the poor, unequal island a perfect breeding ground for a pandemic.

The dictatorial government of Jovenel Moïse has issued standard social distancing decrees, but the reality is that few but the wealthiest Haitians can comply. The large majority of the country works in the informal sector, with 60 percent living on less than $2 per day. Most Haitians have neither the savings nor the housing to socially distance, living in cramped and often informal accommodation. Only half the country has access to running water, meaning sanitation is a huge issue and that number has actually been steadily decreasing since the U.S.-backed coup of 1991 and the decades of authoritarian neoliberal rule that followed it.

Moïse has been ruling by decree since January after canceling elections and has faced over a year and a half of constant, nationwide protests that he has brutally repressed. The ongoing crescendo of violence, because it has been carried out by a loyal U.S. client, has been almost completely ignored across the media spectrum. Now he appears to be using the crisis to further cement his shaky grip on power.

The tyranny and corruption of the U.S.-imposed Moïse government has only been amplified by the COVID-19 crisis now gripping the country. We are seeing them use food giveaways in an overtly political manner such as using armed gangs they are allied with in some areas of the capital to take charge of distribution.”

“They have also been forcing people to stand in crowded lines to apply for a new Dermalog biometric system card in order to qualify for additional aid. This new card replaces the old national ID cards and by no coincidence will double as the new voter registration card. So they are using the cover of COVID-19 to continue strengthening the grip of armed gangs over communities to stifle grassroots dissent, they are also preparing the ground for stealing elections yet again.” Jeb Sprague, Research Associate at the University of California, Riverside and author of Paramilitarism and the assault on democracy in Haiti, shared similar fears about the government’s actions, telling MintPress that, “Instead of focusing on state projects that would benefit the country’s marginalized and working poor, instead of focusing on healthcare and education, the reconstituted right-wing under [former president Michel] Martelly and Moïse have built up 17 special police units and reformed the brutal army. They govern over a country ill-prepared for the coronavirus.”

#Haiti is reopening its textile export industry. A factory owner has said “Haitians have to choose between dying from hunger or the virus” https://t.co/X0zSg9UhTt

To grasp the situation Haiti finds itself in today it is necessary to understand its history. The Haitian Revolution of 1791-1804 resulted in a fully successful slave revolt. However, the great European and American powers have been torturing the country ever since, making sure it does not serve as an example for others to follow. After a blockade of the island was imposed, Haiti agreed to pay huge reparations to France for liberating itself from enslavement, reparations they did not finish paying off until 1947. And for much of the early 20th century, the United States directly occupied it militarily in the same style as the old European empires did to Africa and Asia.

A glimmer of light in a long dark history was offered in 1990, with the country’s first (reasonably) democratic election. The U.S. was confident that its man, former World Bank official Marc Bazin, Minister of Finance under the infamous dictatorship of Jean-Claude “Baby Doc” Duvalier, would easily win. But unbeknownst to Washington, poor Haitians were organizing across the nation to elect a radical priest, Jean-Bertrand Aristide, into power. Fittingly for a party that called itself Lavalas (avalanche in Haitian creole), the result was an enormous landslide: Aristide won 68 percent of the vote to Bazin’s 14. A protester holds a sign that reads”Revolution” in Creole during a protest in Port-au-Prince, Haiti, Nov. 18, 2018. Dieu Nalio Chery | AP

However, hope was dashed as he was almost immediately deposed in a coup that the first Bush administration, behind the scenes, worked hard to ensure was successful. Bazin was installed as leader anyway. With their man at the helm, Washington, the World Bank and others were confident that Haiti would finally become “the Taiwan of the Caribbean” they had been predicting it would be since the 1980s. But the only results of the structural adjustment reforms was to destroy Haitian agriculture and to turn the country into the most exploited sweatshop state in the world.

Remarkably, Aristide’s career was far from over, and his movement managed to elect him into power again in 2001. But, as with the slave revolt 200 years earlier and the 1991 election, hope in Haiti was short-lived as he was again overthrown at the behest of the U.S. government (this time the second Bush administration) and the country returned to its role of servitude to the empire. 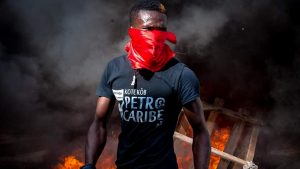 The 2004 coup was the most recent major assault in a history marked by foreign intervention and racialized exploitation propelled through world capitalism and colonialism. As the country is integrated into global capitalism, parts of its population are completely marginalized (and become targets for intense repression), while other portions of its population – the working poor – become nodes in a process that strengthens the revenue base and profitability of transnational corporations.”

Since 2004, successive administrations have partnered with Washington to loot the country, stripping away its assets and public services to the point of collapse. As Pina said, “Billions of dollars intended to upgrade Haiti’s healthcare system and the country’s infrastructure have been stolen under two successive ruling party governments. As a result Haiti’s dilapidated healthcare system is ill-equipped to manage and treat the outbreak of COVID-19.”

The result of decades of plunder is that the country is one of the world’s poorest, and is at the bottom of the pecking order for the importation of food and medical equipment. Nearby Cuba has sent a reported 348 doctors and nurses to the country, but no amount it could reasonably muster can replace a non-functioning state. Haiti has become the perfect breeding ground for the virus, with its population the unwilling guinea pigs in the macabre experiment. “This could be the beginning of a major disaster not just for Haiti, but for many other global south countries that lack adequate healthcare infrastructure,” warned Sprague.

Alan MacLeod is a Staff Writer for MintPress News. After completing his PhD in 2017 he published two books: Bad News From Venezuela: Twenty Years of Fake News and Misreporting and Propaganda in the Information Age: Still Manufacturing Consent. He has also contributed to Fairness and Accuracy in Reporting, The Guardian, Salon, The Grayzone, Jacobin Magazine, Common Dreams the American Herald Tribune and The Canary.