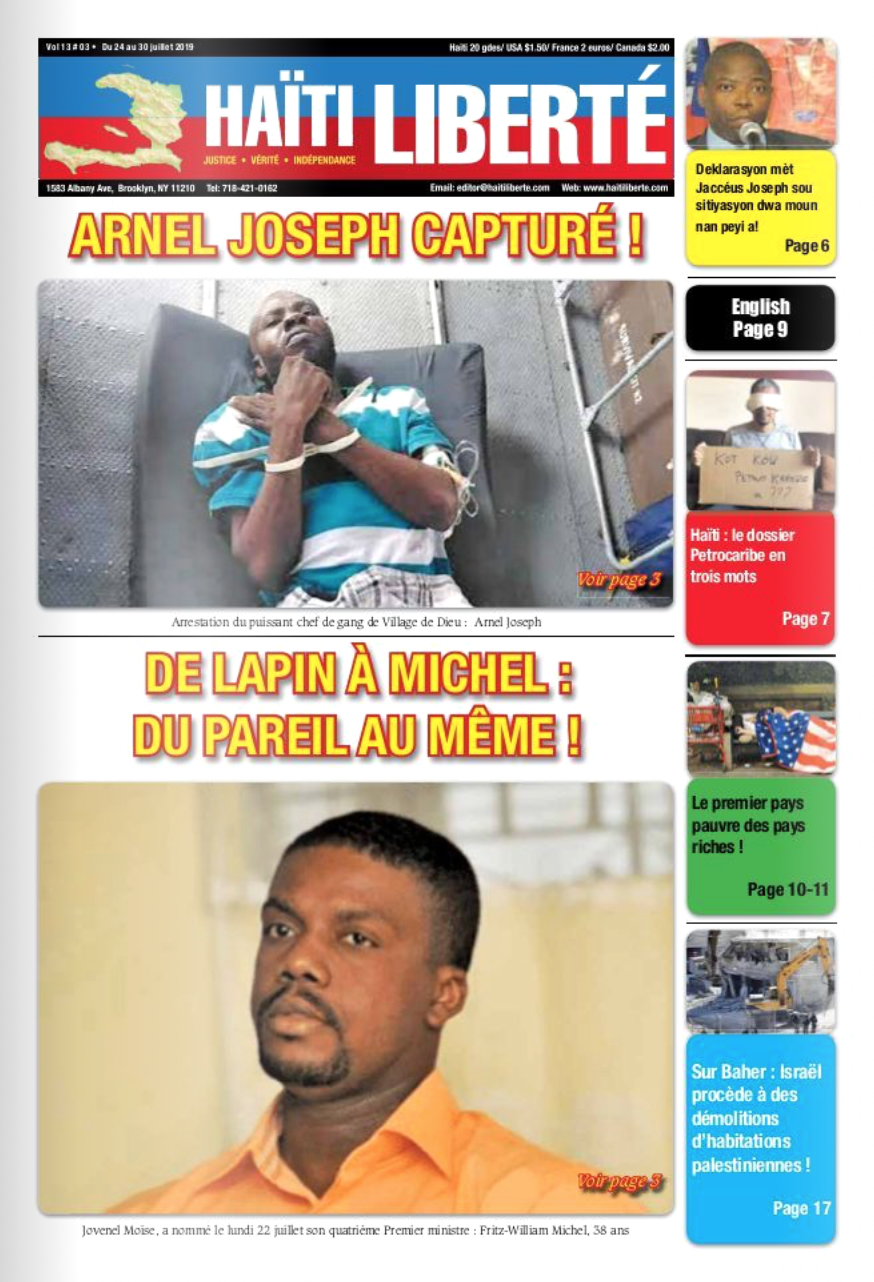 Michel had been tapped to be the Planning Minister in the government of Moïse’s previous PM nominee, Jean Michel Lapin. But Lapin’s bid to be ratified by Parliament was foiled four times, leading him to offer his resignation on the morning of Michel’s nomination.

Since Mar. 21, Lapin had been acting prime minister after the House of Deputies ousted his predecessor, Jean Henry Céant, on Mar. 18.

Michel’s nomination was overshadowed by news of the capture of Arnel Joseph, an infamous gang leader who had eluded police and sowed terror in Haiti’s Artibonite region and the outskirts of the capital, Port-au-Prince.

Haitian Police captured Joseph at the hospital Lumière de Bonne-Fin, in the town of Cavaillon, a few miles east of the southern city of Aux Cayes. He had gone there to receive care for a leg wound sustained during gang warfare around the Artibonite city of Gonaïves in June. The clash left eight people dead and several others wounded.

Joseph had escaped from several attempts by police to arrest him near his Artibonite base. Each time, he retaliated by attacking police stations.

Videos and pictures of Joseph lying naked, bruised, and dirty on his back on the ground under the boots of policemen flooded social media immediately after his arrest.

According to the Haitian daily Le Nouvelliste, which obtained a copy of Michel’s curriculum vitae, the new PM nominee was the chief of  staff of the Economy and Finance Ministry (MEF) until September 2018.

After leaving the College Catts Pressoir, Fritz-William Michel studied accounting from 2000 to 2004 at the National Institute of Administration, Management and Higher International Studies (INAGHEI) and administrative sciences at the Institute of Higher Commercial and Economic Studies (IHECE).

He also attended several seminars including the “National Course for Programming and Financial Policies” organized by the International Monetary Fund (IMF) and the Bank of the Republic of Haiti (BRH).

From December 2011 to July 2012, he held the position of Administrative and Financial Director at the Ministry of Agriculture, Natural Resources and Rural Development (MANDR).

MICHEL’S NOMINATION WAS OVERSHADOWED BY NEWS OF THE CAPTURE OF ARNEL JOSEPH, AN INFAMOUS GANG LEADER

After serving under Finance Minister Jude Alix Patrick Salomon, Michel joined the private sector as CEO of PM Agripro S.A. (founded in October 2016) and CEO of Express Transport and Distribution, and executive director of Carribean Products and Services.

Michel is a member of the federal council of the National Federation of Youth for Development (FNJD), where he holds the position of Budget Director.

He speaks Creole, French, and English. He is married and the father of one child.

Haiti’s rumor mill and social media has been filled with numerous unsubstantiated allegations that Michel’s champion was House of Deputies President Gary Bodeau, who met with President Moïse and Senate President Carl Murat Cantave just prior to the nomination. The rumors also allege without proof that Bodeau and Michel are close to Reynold Deeb, the COO of the Deka Group S.A., one of Haiti’s largest importers, which distributes such well-known Haitian brands as Bongú, Actimed, Nutrigu, Bonlè, and Tempo.

“Nobody understands where the guy came from,” said Steeve Khawly, a former presidential candidate of the Bouclier party which is close to the ruling Haitian Bald-Headed Party (PHTK) of President Moïse. “We’re starting to see people whom we have never seen in politics, and we’re not sure exactly where they’re coming from, what their past is. In a difficult situation like this, we should have a prime minister who is accepted by all parties, capable of doing the transition or doing things differently. But that’s not what we’re seeing here… We’re sensing that we’re going to have more trouble coming soon. ”

Over the past year, President Moïse has faced a growing national uprising of protestors demanding his resignation for his involvement in corruption related to the embezzlement and squandering of some $2 billion from the now-defunct PetroCaribe Fund, which was filled with revenues from cheap Venezuelan oil.