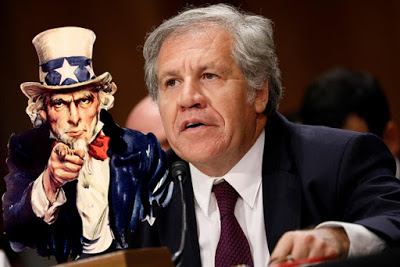 As that era now draws to a chaotic close, the OAS (sometimes dubbed “Washington’s Ministry of Colonial Affairs”) is again trampling legality and protocol in a last-ditch effort to shore up Martelly’s PHTK protégé and successor, President Jovenel Moïse.

In December 2010, Haiti’s Provisional Electoral Council (CEP), legally the “final arbiter” of Haitian elections, found that candidates Mirlande Manigat and Jude Célestin won a Nov. 28, 2010 first round presidential election and were to go to a run-off. But Washington used a debunked OAS report to justify forcing then President René Préval to replace Célestin, the candidate of his party, with Martelly, who had come in third. The CEP, however, did not agree with the swap.

As Haiti Liberté reported at the time,“only four of the eight-member (…) CEP have voted to proceed with the [changed] second round, one short of the five necessary. Furthermore, the first round results have not been published in the journal of record, Le Moniteur, and President René Préval has not officially convoked Haitians to vote, both constitutional requirements.”

olin Granderson, the head of the OAS/Caricom election observers, was completely aware of the second round’s illegality but minimized it as “one of our concerns.” The OAS approved Martelly’s victory anyway.

Last week, the OAS outraged the Haitian people once again by scrambling a make-shift delegation to Haiti to propose that Moïse dialogue with representatives of the tens of thousands of Haitians weekly demanding his resignation. Unfortunately for the OAS and Moïse, there is no sector or organization willing to sit down with the embattled president, all saying that he has lost all credibility.

Sir Ronald Sanders, Ambassador of Antigua and Barbuda to the United States and the OAS, lambasted the Jun. 19 OAS delegation to Haiti as part of an increasing “pattern of ignoring established procedures and authority” because it was sent “without any discussion or mandate by the Permanent Council, the organ responsible for making and overseeing policy between General Assemblies,” he wrote in an article for the Caribbean News Service.

“Instead of action being taken on the authority of the Permanent Council after due deliberation and decision, the visit of a delegation to Haiti seems to have been organized between the Ambassador of the United States, Carlos Trujillo, and the Secretary-General, Luis Almagro in response to a letter of invitation from the Government of Haiti that, most unusually, was not distributed to OAS member states as is the norm,” Sanders wrote. “It is most unlikely, having not discussed, authorized, or mandated the delegation to Haiti and having never been made privy to the Haitian letter, that the entire Permanent Council of the OAS can embrace it, particularly as, according to media reports, the OAS was vilified by protestors.”

“I really don’t see why most of you are upset about the OAS position in this crisis, as if you forgot that it’s this same OAS which came to validate the trickery and falsification in the 2010 election so that their candidate could go to the second round,” tweeted in Kreyòl former Haitian police chief and presidential candidate Mario Andrésol. “The OAS position is clear; if we want change, we have to change our battle strategy.”

The current uprising is spawned by the collapse last year of Haiti’s PetroCaribe deal with Venezuela, brought down, in large part, by U.S. sanctions against the Bolivarian Republic. Under the accord, Venezuela provided Haiti with some $4.3 billion in oil, 40% of whose revenues Haiti kept in the PetroCaribe Fund, repayable after 25 years at 1% interest. The capital account was to be used for social improvement works like roads, schools, and clinics. But PHTK governments embezzled about 74% of the fund into bogus projects, two Senate investigations and a court audit have found.

With the end of cheap Venezuelan oil and credit and following International Monetary Fund demands, the Moïse government tried to hike fuel prices last July, igniting a three day uprising. That spawned anti-corruption demonstrations which first asked “Where did the PetroCaribe money go?” Now they demand that Moïse step down.

The most recent revolutionary upsurge was sparked by a May 31 court report which shows that Moïse took an active part in bilkingHaiti’s masses of millions in PetroCaribe solidarity funds.

Since Haiti reversed its position and voted at the OAS on Jan. 10, 2019 not to recognize Nicolas Maduro as Venezuela’s president, Washington has sent a constant stream of U.S. officials to Haiti, seeking to buttress the besieged regime. The illegitimate OAS delegation seems to have had the same purpose.

Indeed, OAS Secretary General Almagro has led Washington’s charge against Venezuela in the OAS. It is not surprising to see him and Trujillo plot together, leaving out other OAS members, to save Moïse, whose OAS vote they need in their continuing campaign against Maduro.

“The OAS, which only encourages political depravity in the region, particularly in Haiti, has no real contribution to make to the resolution of the Haitian crisis,” wrote the anti-corruption group Nou Pap Konplis (We Will Not be Complicit) in a Jun. 19 statement. “On the contrary, the OAS visit only makes matters worse. In fact, we [Haitians] can only rely on ourselves to solve this problem.”

“Because of its partisan positions, its unconditional support for the corrupt PHTK regime, and for being one of the architects which contributed to putting the current regime in place, the OAS is unworthy of mediating between the opposition constituted in different organizations, the majority of the population, and Jovenel Moïse,” Nou Pap Konplis continued, concluding that “we believe that [the OAS] mission failed and was pitifully mistaken in believing that it was authorized to teach Haitians anything and to give them orders. It is not up to the OAS to dictate what attitude or behavior we should adopt.”