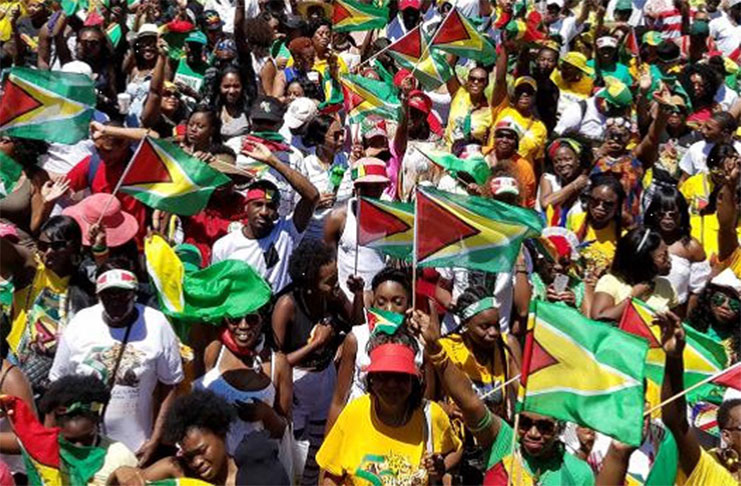 Call on all parties to guarantee that the Caribbean in all its diversity be actively promoted as a collective zone of peace in which principles and practices of respectful co-existence are adhered to.

The Caribbean has endured multiple cycles of violence, from attempted genocide, enslavement, forced migration, indentureship, and colonialism in our past to foreign occupation, dictatorship, and neocolonial exploitation in the present. We know well the economic, social and cultural toll of conflict and violence in the region and on its peoples.

We view with alarm the recent escalation of tension through words and actions around the political and economic crisis in Venezuela on the part of global superpowers. We reject foreign interference by the US, Britain, Canada, Russia and any others who attempt to bring about an end to the crisis by direct intervention in the outcome of the conflict. Venezuela is a sovereign country, not a colony of any foreign power. Nicolas Maduro is the elected head of that country, in spite of all declarations to the contrary.

The Caribbean has had a proud past of adherence to the principles of non-alignment, territorial integrity and non-interference in the affairs of sovereign nations. In 1972 the Prime Ministers of Barbados, Guyana, Trinidad & Tobago and Jamaica, upheld the sovereign right of Caribbean States to establish and pursue economic and diplomatic relations with Cuba in opposition to the OAS call for the blacklisting of that country.

We are deeply dismayed by the betrayal of these principles by the governments of Guyana, Jamaica, Haiti, the Bahamas, and St Lucia which on January 10, 2019, with the majority of the members of the Permanent Council of the Organisation of American States, followed the lead of the United States of America and voted not to recognise the second five-year term of Venezuelan President Nicolas Maduro. This position and that of the USA, Britain and Canada have escalated divisions in that country and led to further violence and a possible increase in loss of life.

The conflict in Venezuela has been accompanied by the threat of increased militarization of the Caribbean region.  We oppose all attempts to establish a foreign military presence in the Caribbean, including a reported proposal for a British military base in the region. Any such presence can only further militarize our region, erode the principle of sovereignty and compromise the principles of non-alignment that are critical to regional autonomy and independence.

We firmly support the CARICOM statement on Venezuela issued on January 24, 2019, and endorse in the strongest possible terms its call for all external forces to refrain from interference in the affairs of sovereign states, adhere to the rule of law and work to resolve the crisis peacefully through meaningful dialogue and diplomacy. We urge both the Maduro government and opposition to work through mediation toward a peaceful solution.

We know that the crisis around basic needs such as food and medicine in Venezuela has particularly serious effects on women and children. The situation is urgent and dangerous and a speedy resolution imperative. We in the Caribbean know only too well the plight of economic migrants and the hardships they are forced to endure. We are heartened by the humane response of our sister Caribbean nations such as Guyana & Trinidad & Tobago to offer assistance to our Venezuelan neighbours fleeing hardship, and call for this humanitarian assistance to not only continue but expand while upholding the right of refugees to freedom from exploitation including sexual exploitation and human right abuses as set out in international treaties.

We are also deeply concerned that current tensions and competition for spheres of influence will further exacerbate the Guyana/Venezuela border controversy which has been ongoing for many years, and escalate the risk of deepening conflict and destabilizing the entire region.  We therefore strongly state our support for Guyana’s right to territorial integrity and the search for a settlement of the controversy through the World Court.  It should go without saying that Venezuela’s territorial claim against Guyana is not a reason for the Guyanese authorities or people to support foreign intervention in the region.