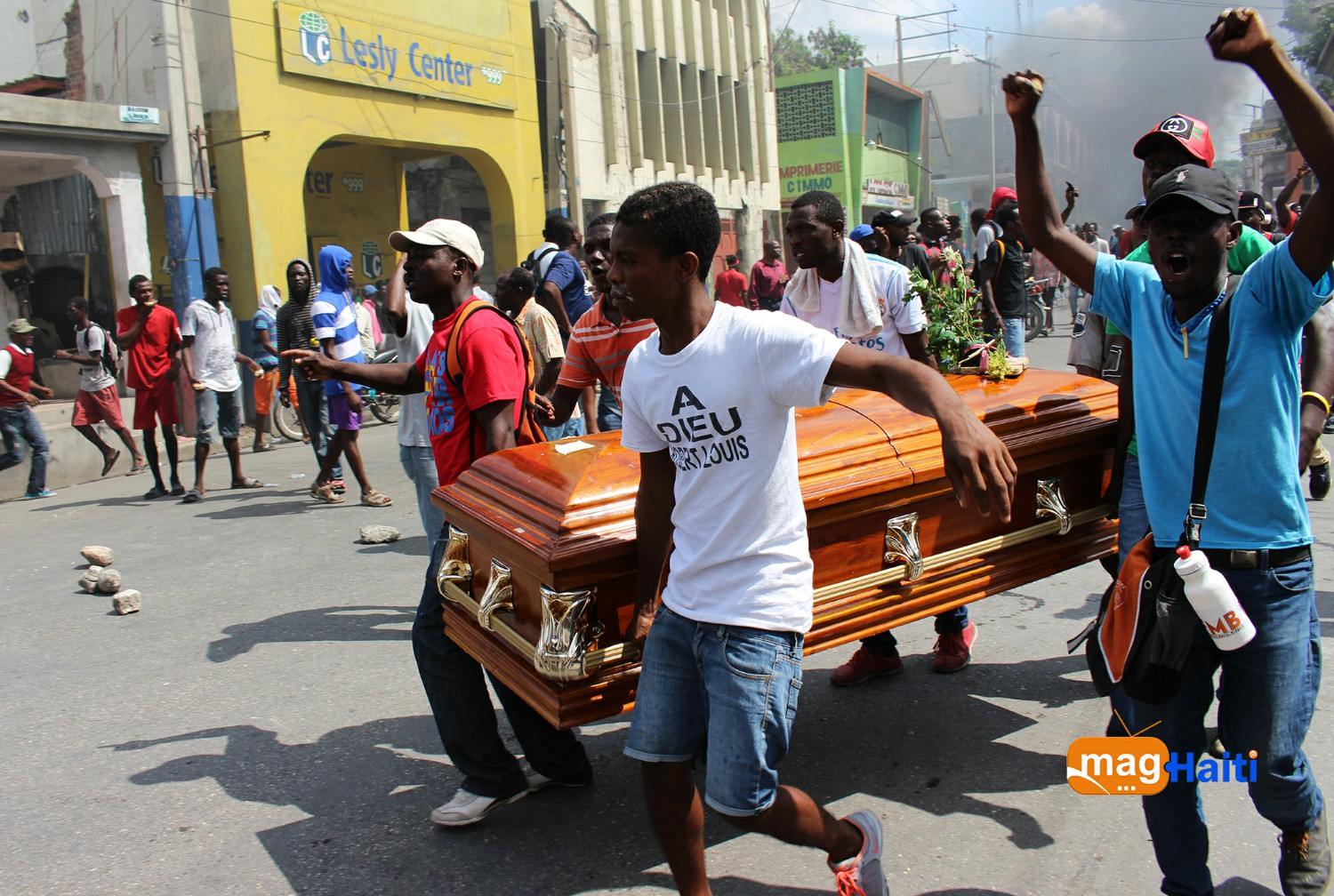 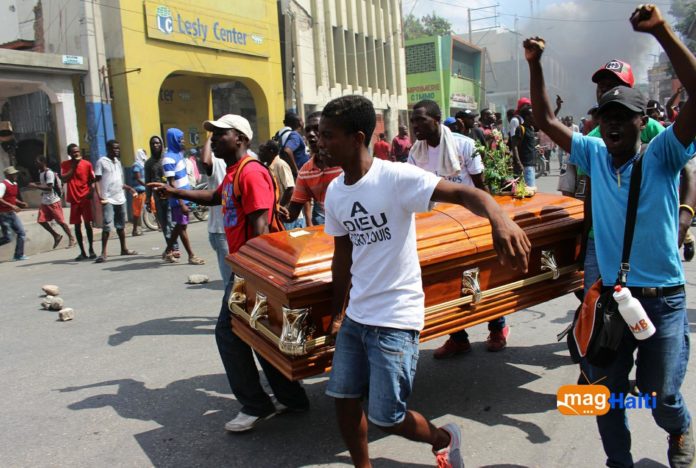 When it was learned that at least two people were killed by police bullets outside the church, the mourners marched with the caskets down the hill to the center of town.

On Oct. 31, hundreds of mourners gathered at Our Lady of Perpetual Help church in Port-au-Prince’s Belair neighborhood for the funeral of six of the seven protestors killed by police during the massive Oct. 17 march against the plundering of hundreds of millions of dollars from the Venezuela-provided PetroCaribe fund. 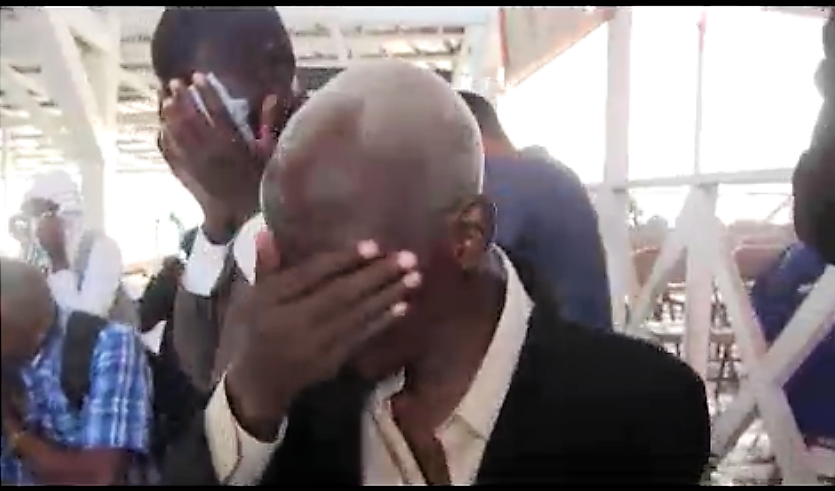 On Oct. 31, mourners trying to rub tear-gas from their eyes before fleeing the funeral for six of seven demonstrators killed on Oct. 17.

Heavy police patrols in the area outside the church enraged the local population. Around 10 a.m., skirmishes erupted, with protestors throwing rocks and the police firing bullets and tear-gas. The pungent gas filled the church, setting off screaming and panic, as mourners and priests fled from around the coffins and from benches and chairs. Outside mourners angrily denounced the government and the police, many calling for President Jovenel Moïse’s resignation and arrest. 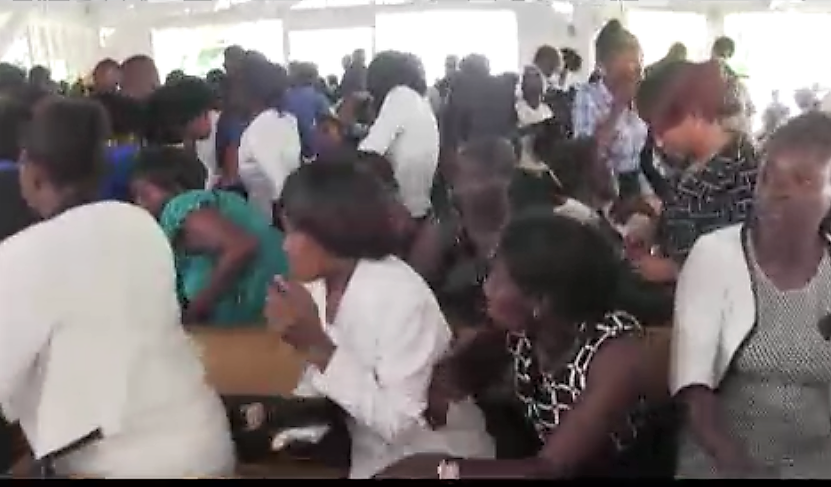 The funeral service resumed a little later, but when it was learned that at least two people were killed by police bullets outside the church, the mourners marched with the caskets down the hill to the center of town. There they demonstrated and built burning-tire barricades. The police’s specialized crowd-control units – BOID and CIMO – dispersed the large, impromptu demonstration after it marched to the central Champ de Mars. 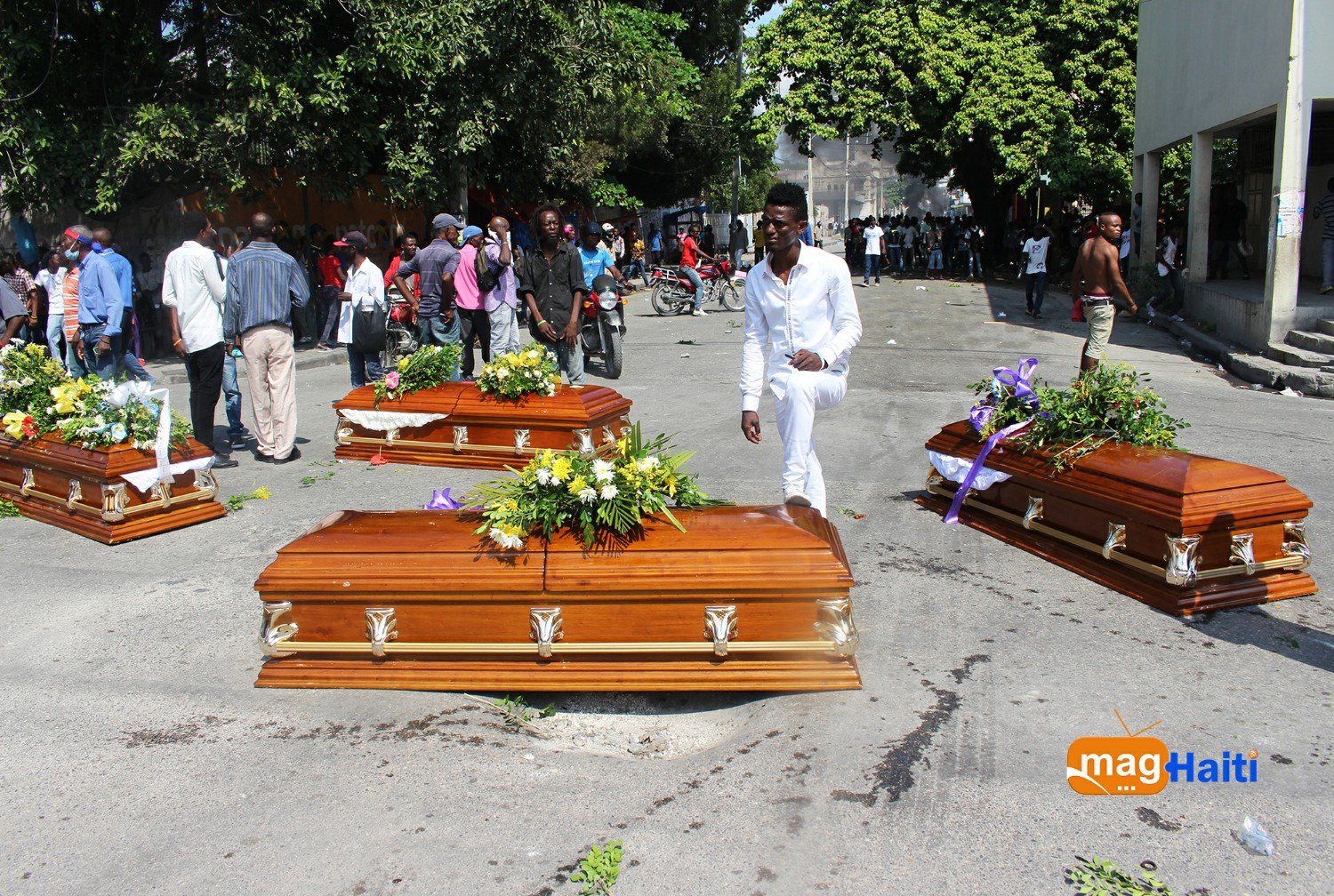 Demonstrators marched with the coffins of the Oct. 17 victims to downtown Port-au-Prince.

“Nine people were wounded by bullets downtown during the funeral for the people assassinated on Oct. 17, 2018, and they are presently at the General Hospital,” declared activist lawyer André Michel of the Democratic and Popular Sector, an opposition coalition he leads. “Clearly, today again, the ‘forces of order’ have massacred the civilian population.” 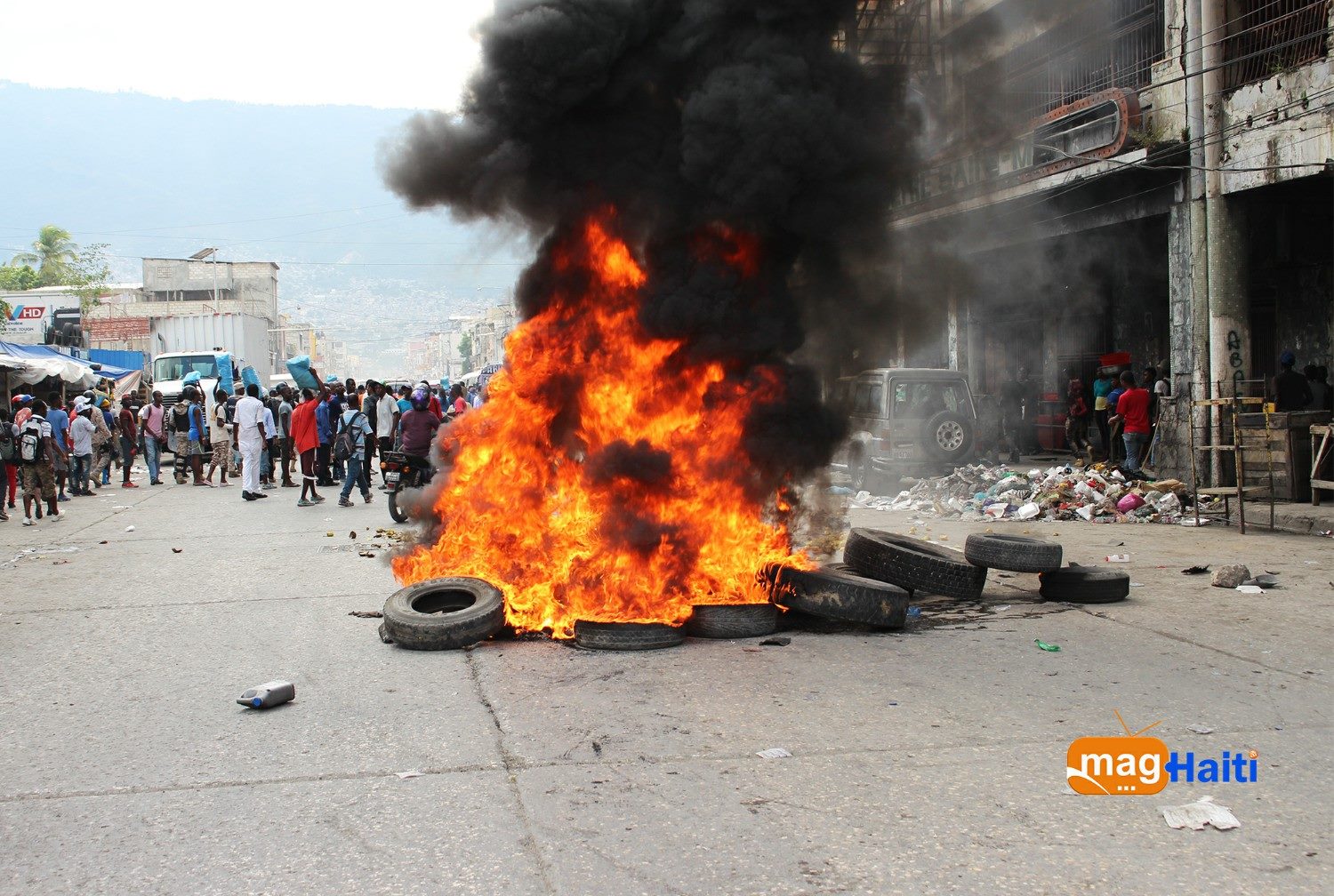 A similar attack took place on Nov. 4 at the Cathedral in Gonaïves, during the Patron Saint’s Day of St. Charles Borromée. Thugs said to be allied with the powerful local Sen. Youri Latortue, a presidential hopeful and close ally of the ruling Haitian Bald-Headed Party (PHTK), savagely kicked and beat worshipers attending a mass during which government officials and Latortue were denounced for their alleged involvement in PetroCaribe embezzlement. 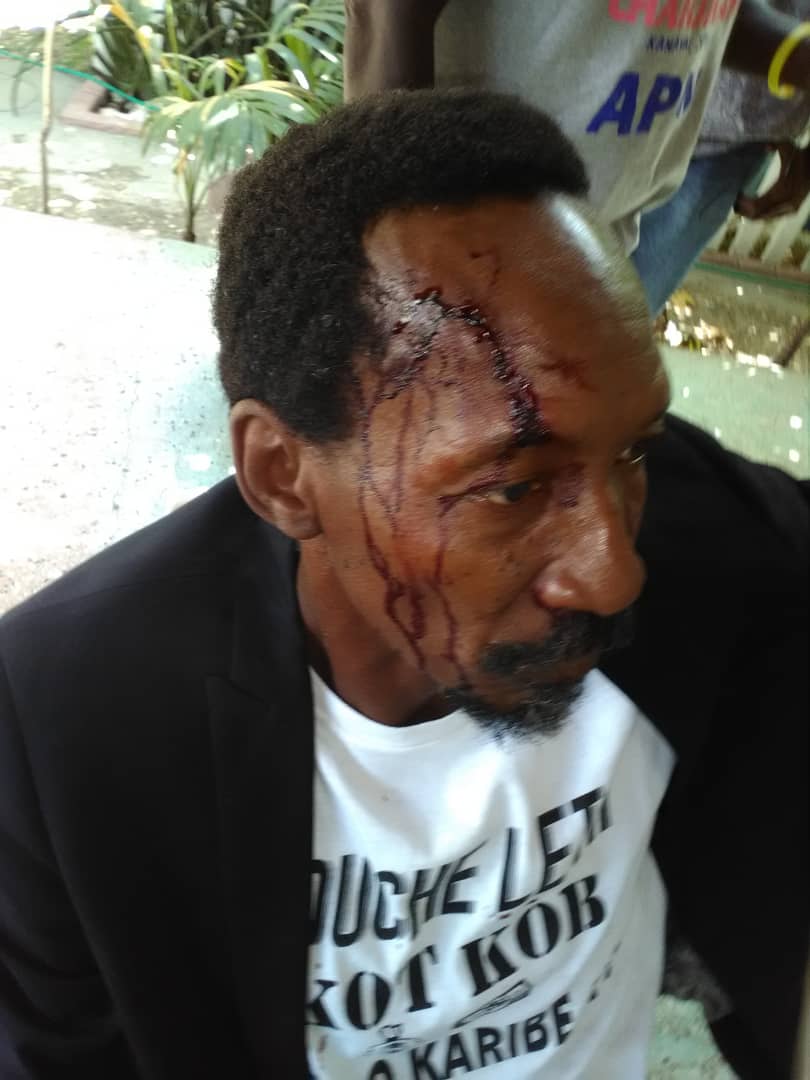 “Two members of the Platform of Organizations to Save the Artibonite, engaged in the mobilization to demand accountability for the management of Petrocaribe funds in the city of independence [Gonaïves], were beaten,” according to the news website Loop. “Jacques Roubens Bordenave was violently physically assaulted by a group of individuals, then wounded in the head, and Donald Saint Jean in the shoulder while they participated in the traditional mass organized on the occasion of the town’s patronal feast. The victims point to the Department’s senator Youri Latortue, who, according to them, ordered his henchmen to attack them.”

The increased government repression is acting like gasoline on a fire. Popular organizations around Haiti are vowing to redouble their efforts to intensify their PetroCaribe justice mobilizations and bring out even more demonstrators in the month ahead. Anticipation and tension is building around a nationwide mobilization on Nov. 18, the 215th anniversary of the Battle of Vertières, in which the former slaves of St. Domingue defeated Napoleon’s legions, winning Haiti’s independence.

Below is a Nov. 1 statement by the Assembly of Political, Union, and Popular Organizations (Konbit Oganizasyon Politik, Sendikal ak Popilè yo), which is representative of popular sentiment across Haiti.


A Communiqué of the Assembly of Political, Union, and Popular Organizations on the repression of the Tèt Kale power* against the people

The Assembly of Political, Union, and Popular Organizations denounces with all its strength that the Haitian government has sent police bandits to carry out repressive acts against the people. We recall that on Oct. 17, 2018, about three million people nationwide took to the streets to demand the departure of the group in power along with the arrest of the thieves of the PetroCaribe fund.

Before Oct. 17, President Jovenel Moïse visited several police stations to encourage police officers to repress the population. And just as the indicted president wanted, during the Oct. 17 mobilization, police assassins fired on the people in several departments. More than seven demonstrators died and more than 50 compatriots ere wounded by the bullets of police bandits. 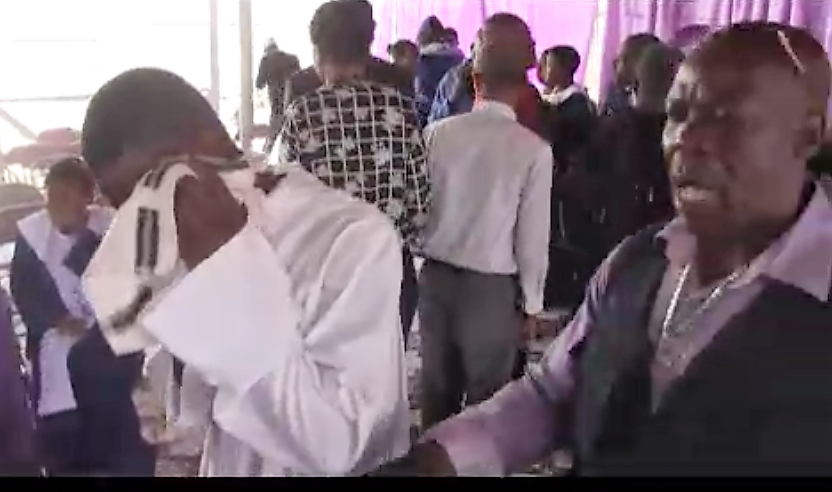 Priest tries to wipe tear-gas from his eyes before leaving church with mourners.

Once again, during the funeral of our compatriots in Belair, the police’s criminal mercenaries struck again. Several comrades were injured by gunshots and tear-gas. The criminals didn’t even spare people inside the church from tear-gas. Even the priest who was presiding over the funeral had to leave the church to escape from the gas.

While saluting the courage of our compatriots who took the lead, the Assembly of Political, Union, and Popular Organizations condemns with all its might the repression carried out by Jovenel Moïse and the CSPN [High Council of the National Police] by sending police criminals against demonstrators. In this sense, we call on the victims to take to court the indicted Jovenel Moïse and the entire CSPN. 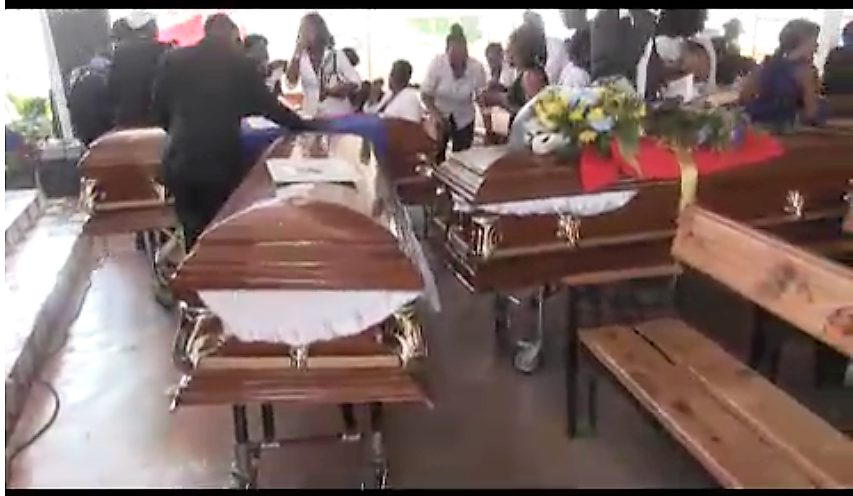 Caskets were left unattended as people fled the church.

This repressive and anti-democratic conduct shows clearly that the Tèt Kale snake if far from dead, which is why it is going around drinking blood everywhere. The remedy to the Tèt Kale snake is constant mobilization. These repressive acts don’t scare us. We’ll continue mobilizing everywhere in the country and overseas to crush the head of the snake and achieve the arrest and judgement of all the thieves who stole PetroCaribe funds.

That’s why on Nov. 2, we’ll warm up with a PetroGede* mobilization. On Nov. 18, we’ll mobilize in the four corners of the country and in the diaspora. On Nov. 19 and 20, there will be a PetroBlockage, the country will be brought to a standstill, until this ends.

*Tèt Kale (literally, Bald Headed) refers to the ruling party, PHTK, of Jovenel Moïse, which was founded by his mentor and predecessor Michel Martelly

** Gede is a traditional vodou ceremony, similar to the Day of the Dead, held on Nov. 2.