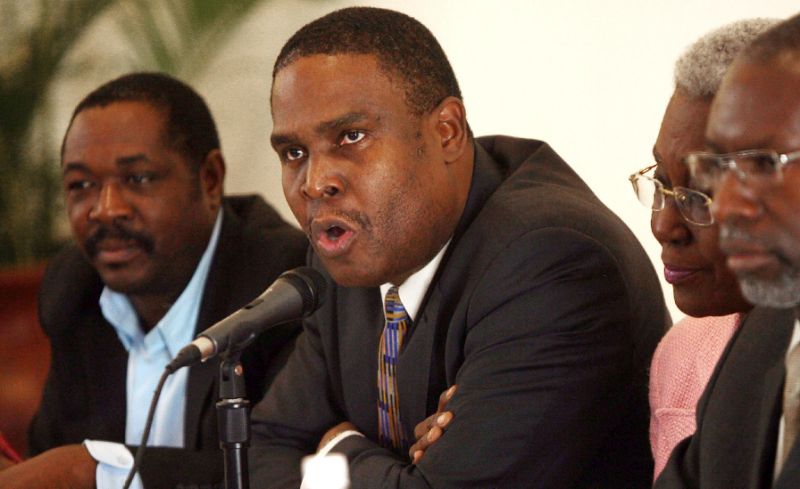 By Kim Ives – Counterpunch
On Sun., Aug. 5, Haitian President Jovenel Moïse nominated two-time presidential candidate Jean Henry Céant, 61, leader of the Renmen Ayiti (Love Haiti) party, to be his next prime minister.
If approved by Parliament, Céant would replace Jack Guy Lafontant, who resigned on Sat., Jul. 14 as Moïse’s first prime minister following a three-day nationwide uprising from Jul. 6-8 (and then a two-day general strike), which resulted in a few deaths and dozens of businesses being burned or damaged. The rebellion against corruption, waste, and austerity, which is still smoldering, was sparked by steep fuel price hikes on gasoline (38%), diesel (47%), and kerosene (51%).
Moïse’s announced his choice over Twitter (as he had for Lafontant) after two days of protracted negotiations with parliamentarians.
Trained as a lawyer, Céant has a genial personality but is widely viewed and reviled by the Haitian people as a “land thief” (volè tè) for his conduct as a notaireor notary, who in Haiti is a cross between an accountant and lawyer supposedly safeguarding the titles to their clients’ land. Almost every notaire is accused, rightly or wrongly, of absconding with land titles, often after their clients die.
But Céant is also viewed as a traitor. In the 1990s and 2000s, Céant was the notaire for former president Jean-Bertrand Aristide, helping him purchase land in the Port-au-Prince suburb Tabarre for his residence and the Aristide Foundation for Democracy and its university (UNIFA).
But during Aristide’s 2004-2011 exile in South Africa, things soured between the two men, and Céant unsuccessfully ran for president under the banner of Renmen Ayiti in the 2010 election.
In a Nov. 10, 2009 U.S. Confidential cable provided by Wikileaks to Haïti Liberté, then Ambassador Kenneth Merten (who now heads the U.S. State Department’s Haiti Desk) described the “Prospects for Fanmi Lavalas in the 2010 Elections.” He grouped Céant under the heading of “Lavalas Activists in Other Political Parties,” writing that he was “Aristide’s notary and personal friend.”
Merten also reported that Céant “was an  early supporter of Aristide, and is thought to have helped Aristide in meeting property ownership requirements so he could run for President.  Céant’s brother, Harry Céant, was at the head of CONATEL (Haiti’s equivalent of the Federal Communications Commission) under Aristide. Céant’s wealth (by Haitian standards), combined with his ties to Aristide, raises suspicions about his past dealings.”
But when right-wing former konpa singer Michel Martelly won an illegal, controversial election in 2011, Céant was quick to flip to the neo-Duvalierist camp, proudly mugging for cameras at the post-inauguration party of the new president whom he had trenchantly denounced during the campaign.
“Céant is a consummate opportunist,” explained Henriot Dorcent, a Haitian political analyst who speaks on the weekly Sunday Radio Panou program Truth Serum/Haiti on the Airwaves. “Under the dictatorship of Gen. Prosper Avril, he worked closely with lawyer Réné Julien, who was Céant’s mentor and Avril’s cousin. But when the political winds shifted, he joined Aristide and the Lavalas, acting as Aristide’s notaire and getting jobs for his wife as Aristide’s private secretary and his brother in CONATEL. Then he jumped into the Martelly camp, where he headed the project to remove people from their homes in downtown Port-au-Prince after the earthquake without compensating them. When Jovenel came to power, there was a scathing report by Haiti’s anti-corruption unit UCREF detailing Jovenel’s money-laundering through his business Agritrans. Who was the first to jump to Jovenel’s defense, saying the excellent report was a fabrication? Jean-Henry Céant!”
To top it all off, when former paramilitary leader Guy Philippe was arrested by Haitian police and handed over to the U.S. Drug Enforcement Agency (DEA) on drug trafficking charges just before Jovenel Moïse’s inauguration in 2017, Céant shrilly called on Jovenel to do everything in his power to defend Philippe and win his release. Guy Philippe had played a leading role in the second coup d’état against Aristide in February 2004.
In 2012, after Martelly was in power and Aristide had returned to Haiti, Céant appeared to have played a role in trying to reopen an indictment against Aristide on corruption charges (see Haïti Liberté, Vol. 5, No. 33, Feb. 29, 2012).
Jean-Henry Céant was born on Sep. 27, 1956 in Croix-des-Missions, which is part of Tabarre, and, during his 2015-2016 presidential run as Renmen Ayiti’s candidate, had the third best-funded campaign – with the largest billboards and most flyers – after Jovenel Moïse and Jude Céléstin, the candidate of former President René Préval’s party. Nonetheless, he placed fifth with only .75% of the vote.
“I thank the President of the Republic President Jovenel Moïse for choosing me as his prime minister,” Céant wrote on his Facebook page on Aug. 5. “I’m aware of the dimensions of the task and the challenges which await me.”
Farah Juste, the reigning queen of Haitian protest song and long-time activist in the Lavalas Family party, summed up Céant’s prospects: “he dies in the film,” (li mouri nan fim nan) a Kreyòl catch-phrase meaning someone is doomed.
“For three reasons,” she continued. “First, the people despise him for the way he made money off of uprooting them from their homes in downtown Port-au-Prince under Martelly and [his Prime Minister Laurent] Lamothe. Second, the opposition doesn’t like him and doesn’t trust him. Thirdly, Jovenel would never let him run things, the same way Jovenel completely controlled Lafontant.”
Céant has to be approved by Parliament, which nominally is controlled by Moïse’s Haitian Bald-Headed Party (PHTK) and its allies. However, Moïse has been grievously politically wounded by the July uprising, causing some of his allies to take a distance. And historically, the president’s first nominees often are shot down in the confirmation process.
In fact, Juste wonders whether Céant isn’t just “cannon fodder.”
“My sources tell me that Céant is not really the man that Jovenel wants,” she concluded. “The real person he wants will come after Céant.”
Asked who that person is, she replied: “I really don’t know.”