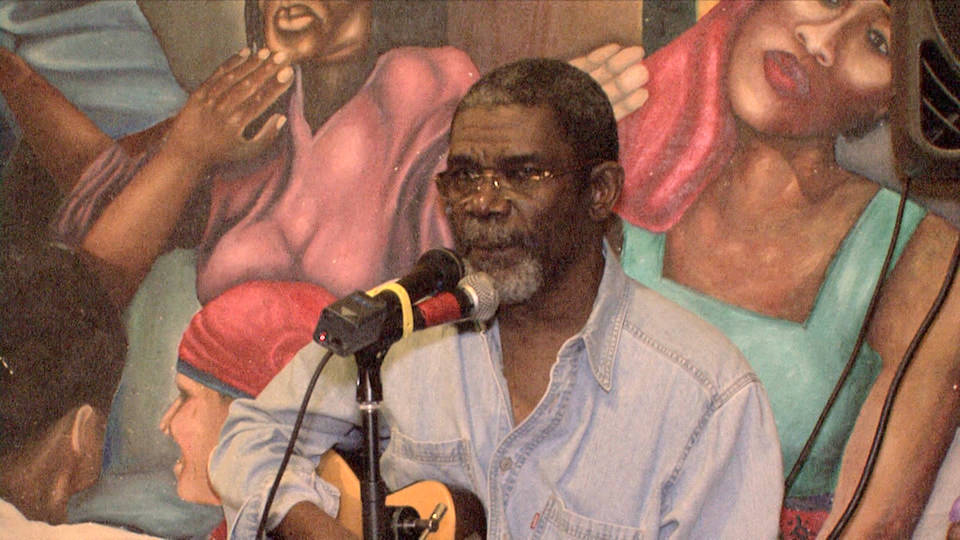 Joseph Emmanuel “Manno” Charlemagne, Haiti’s most beloved and
controversial folk singer, died in a Miami Beach hospital on Dec. 10
at the age of 69, after a struggle of several months with lung cancer
which had spread to his brain.

His rich baritone voice, trenchant lyrics, and graceful melodies
inspired the generation of Haitians which rose up against the
three-decade Duvalier dictatorship in 1986. Sometimes called the
Haitian Bob Marley or Bob Dylan, Manno’s huge popularity won him
Port-au-Prince’s mayor’s office in 1995, but his lyrical idealism soon
dashed against the rocks of Haiti’s difficult political realities, and
he was all but chased from that office. In recent years, he had
withdrawn from Haiti’s political scene, except for some ill-fated
sorties which he regretted.

Born on Apr. 14, 1948, Manno was raised mostly by his aunt in
Port-au-Prince’s Carrefour neighborhood and came of age under the
brutal dictatorship of François “Papa Doc” Duvalier, who rose to power
in 1957. Both his aunt and mother were singers. His father, whose
identity Manno only learned from his mother in 1985, was also a
musician. When Manno traveled to New York to finally meet him, he
learned his father had died two months earlier.


Manno, who said he was from Haiti’s “lumpen proletariat,”  started
playing guitar and singing at the age of 16, and in 1968, at age 20,
he launched a mini-djaz called Les Remarquables. But he soon moved in
the direction of the traditional twoubadou music, a form of Haitian
folk song, and launched the group Les Trouvères with singer Marco
Jeanty.

After Papa Doc died in 1971, succeeded as “President-for-Life” by his
son, Jean-Claude “Baby Doc” Duvalier, a democracy movement began to
grow in Haiti. Manno wrote politically suggestive songs about the poor
and exploited, among whom he’d grown up, and the duo began to sing at
small underground events of students and intellectuals in the late
1970s. In May 1978, the duo played their angaje (politically engaged)
songs on the airwaves of journalist Jean Dominique’s Radio Haiti
Inter, championed by deejay and station manager Richard Brisson, who
in January 1982 would be captured and killed after a failed overthrow
attempt against Duvalier.

The duo became a sensation, and later that year, musicologist Raoul
Dénis recorded their songs which were released in an album entitled
simply “Manno et Marco” by Marc Records in New York. Over the next
eight years, until Baby Doc’s overthrow on Feb. 7, 1986, the album
became the soundtrack for the pro-democracy movement both in Haiti and
its diaspora.

In 1980, the Duvalier regime stepped up its repression of democracy
activists. Manno slipped out of a concert and sought exile in the U.S.
on Jul. 4. While in Boston and New York for most of the next six
years, he became  a fixture at anti-Duvalierist rallies and marches.
Along with composer Nikol Levy, he composed much of the music for
Haiti Films’ 1983 documentary Bitter Cane, which also helped propel
the anti-Duvalierist movement and Manno’s renown.

During this time, he released his first solo albums, Konviksyon (1984)
and Fini les Colonies! (1985) to worldwide acclaim.

After Duvalier’s 1986 fall, Manno returned to Haiti and became one of
the most prominent artistic and political voices of the emerging
pro-democracy lavalas movement, which brought President Jean-Bertrand
Aristide to power in February 1991. In 1990, Manno had released the
album Òganizasyon Mondyal, which cemented his fame as Haiti’s
preeminent anti-imperialist singer.

A Washington-backed coup d’état in September 1991 sent Aristide into
exile, and Haitian police arrested Manno at his home on Oct. 11. After
Hollywood stars and Amnesty International protested, he was released a
week later. Manno eventually sought refuge in Argentina’s Embassy,
where a human rights delegation, headed by former U.S. Attorney
General Ramsey Clark, met him in December 1991 (as depicted in the
1992 documentary Killing the Dream by Crowing Rooster Arts, which
played nationally in the U.S. on PBS). After the delegation raised
$3,000 for his release from the country, Manno was accorded safe
passage to the airport and flew once again into exile in January 1992.

During the next three years of his and Aristide’s exile, Manno
traveled the world playing at demonstrations, fundraisers, and
political rallies. When he returned to Haiti in 1994, he successfully
ran in 1995 for mayor of Port-au-Prince against Evans Paul, a former
ally who had indirectly supported the 1991 coup.

Once in Haiti’s third most important executive office (after President
and Prime Minister), Manno, who had just months earlier publicly
declared himself a Communist, faced many of the intractable problems
of corruption, violence, and chaos that confront any Haitian
politician. Although once allies, he ended up at odds with both
Aristide and President René Préval. When Manno’s gun-toting deputies
brutally evicted illegal vendors (mostly market women) from
Port-au-Prince’s central Champ-de-Mars square, it evoked particular
consternation among even his most loyal supporters. He finally stepped
down from the office in 1999, a few months before the end of his term.

Manno moved to Miami and dropped from view for about two years, but
then in 2002, he began playing twice a week at Tap Tap Restaurant in
South Beach with Richard Laguerre (bass guitar), Damas Jean-François
(electric guitar), and Jocelyn Egourdet (tenor sax). The new band’s
music was released on CD as Manno at Tap Tap (Crowing Rooster Arts,
2004), and the band often played to a packed house over the next 15
years.

Following the 2004 coup d’état against Aristide (then serving a second
term), Manno again spoke out against the coup but also made several
provocatively critical remarks about Aristide (then exiled in South
Africa) on Haitian radio (as was his wont), which earned him the ire
of the anti-coup Lavalas masses.

Manno continued to visit Haiti, mostly to form youth chorales in
remote corners of the Haitian countryside, like Camp Perrin and
Pignon. The sting and humiliation of his political failure and his
naturally provocative style caused him to occasionally make
intemperate declarations on Haitian radios, which added to his
political marginalization.

But it was the rise of neo-Duvalierist politician Michel Martelly
which did the most damage to Manno’s reputation. Although he had been
a member of the Duvalierist paramilitary force, the Tontons Macoute,
Martelly, who also grew up in Carrefour, had known and admired Manno
as a youth. When he became Haiti’s President in 2010, Martelly courted
Manno, giving him an office and a salary as an “advisor” in the
National Palace. Citing outrageous corruption, Manno eventually quit
the job but remained on cordial terms with his “friend” and fellow
musician “Sweet Micky” Martelly, even as popular rage against the
latter grew.

Following controversial October 2015 elections, Manno agreed to serve
on an investigative commission convened by Martelly, although it was
generally viewed as a rubber-stamp body.

Following that final foray into politics, which provoked great dismay
among many, he returned to Miami, where he resumed his biweekly
performances at Tap Tap.

Last year, Manno was diagnosed with and began treatment for a fungal
lung infection, which affects many Haitians who’ve had tuberculosis.
He visited Haiti in the summer, during which time President Jovenel
Moïse’s officials tried to entice him, with money and favors, to
participate in the government’s “Caravan for Change,” a sort of
traveling political circus. Manno refused.

In late July, Manno began to have dizzy spells and speech problems.
Fearing a stroke, he quickly returned to Mt. Sinai Hospital in Miami
Beach, where doctors found a huge malignant tumor in his brain which
had mestastacized from cancer in his lungs. On Jul. 31, he underwent a
successful 10-hour operation to remove most of the tumor, but it was
followed by grueling radiation and chemotherapy sessions, which left
him weak. In early November, Manno suffered several seizures and
strokes, which sent him first back to Mt. Sinai Medical Center, and
then, briefly, the Miami Jewish Health Systems nursing home in Miami’s
Little Haiti. Just after Thanksgiving, he developed a high fever and
was rushed from the nursing home to Mt. Sinai, where they discovered
he had a pulmonary embolism. Doctors were unable to dissolve it, and
the cancer in his lungs and brain continued its inexorable march.

In his final days, surrounded by a half-sister, former wife, two sons,
a daughter, and occasional visitors from Tap Tap, Manno slipped in and
out of consciousness. When a journalist from Haïti Liberté visited his
bedside on the evening of Dec. 6, Manno suffered from tremors and had
difficulty speaking and controlling his movements, but was lucid and
humorous reminiscing about old times. “You wouldn’t understand what
we’re talking about,” he said, turning to his son, Ti Manno, who was
also in the room. “That was before you were born.”

In the final three days of his life, he was mostly unconscious, with
the hospital providing only palliative care: an oxygen mask and heavy
doses of morphine to ease his pain.

He finally died shortly after 4:00 a.m. on Sun., Dec. 10. Although
expected, the news of his death sent a shock-wave through Haitian
communities for which Manno had been a symbol of resistance to the
Duvalier dictatorship, and an authentic voice and representative of
Haitian popular culture, critical of U.S. imperialism and its misdeeds
both in Haiti and around the world.

There are several books about the musician, including Manno
Charlemagne: 30 Years of Songs published by Fondation Connaissance &
Liberté (FOKAL, 2006) , and Nicole Augereau’s graphic comic book Quand
viennent les bêtes sauvages published in 2016. Among the films about
him are Frantz Voltaire’s Konviksyon (2011) and Dans La Gueule du
Crocodile (1998) by Canadians  Catherine Larivain and Lucie Ouimet.
The last album of his music, entitled Les Inédits de Manno Charlemagne
(The Unpublished Songs of Manno Charlemagne), was released in 2006.

After a private viewing for his family, there will be a public viewing
of Manno’s body on Thu., Dec. 14 at 5:30 p.m. at Notre Dame d’Haïti
Catholic Church on 62nd Street in Miami’s Little Haiti. Although Manno
was a devout atheist, there will then be a funeral mass at 7:30 p.m..
His body will be flown to Haiti on Sat., Dec. 16 and exposed on Tue.,
Dec. 19 at the Museum of the Haitian National Pantheon (MUPANAH) on
Port-au-Prince’s Champ-de-Mars. The funeral is scheduled to take place
on Fri., Dec. 22.

Meanwhile, in Brooklyn, the community group KAKOLA and Haïti Liberté
are organizing a traditional veye patriyotik (patriotic wake) to pay
homage to Manno on Fri., Dec. 15 from 7-11 p.m. at Haïti Liberté, 1583
Albany Avenue, Brooklyn, NY. At the same time in Miami, former
friends, comrades, and associates will be holding a similar tribute at
the Little Haiti Cultural Center on NE 2nd Avenue.

Although his final years were compromised by political missteps,
unseemly associations,  and outbursts, Manno Charlemagne earned a
permanent place in the hearts and memories of the Haitian people for
his revolutionary, anti-imperialist, and pro-democracy songs of the
1970s, 80s, and 90s.

To give a taste of his genius and to what he dedicated his life and
art, it is fitting to close his obituary with his own words, extracted
from two classics, Fini le colonies in French, and Konviksyon in
Kreyòl;

It’s your conviction that has to sustain you
That can allow you achieve to something as a poor person
On all the old treacherous roads
One must really struggle for things to change.